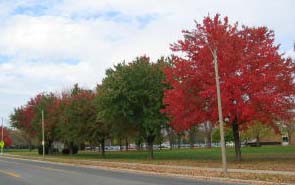 Given the vigor and tolerance of most elm trees, several new cultivars should be back on our preferred street tree lists. But how do we compare them? New disease and insect resistant varieties seem to be popping up all over. There are so many with different forms, textures, and other qualities, where does one start?

One of the most unique varieties I have seen recently is the Frontier Elm. The Frontier Elm appears to be a small to intermediate size tree, maybe reaching 40′ and possibly as wide, although early growth appears to be narrower. It has small leaves, with a moderately strong central leader and upright, pyramidal growth. Of most interest is its reddish purple fall color, a striking change from the more typical fall yellow color of most elms. In the nursery, this is a fast growing tree with great visual appeal. It is easy to transplant, but unlike most elms, does not appear to be as drought tolerant.

The literature claims this hybrid elm exhibits a high level of disease tolerance to the fungus that causes Dutch Elm Disease, and moderate resistance to the Elm Leaf Beetle in laboratory and field tests. In addition, the Frontier Elm appears highly tolerant to natural infections of elm yellows. This is an elm cultivar, released in 1990, with spring flowering (Ulmus carpinifolia) and fall flowering (Ulmus parvifolia) parents. So far no seed production has occurred.

This tree is a sleeper. It has good vigor, tolerates poor soils, grows fast, but does not get big. It also has small leaves and no seed, resistant of insect and disease problems, with outstanding fall color. The Frontier Elm tree should be on everyone’s street tree list.

What has your experience been with this tree or others? Let me know!