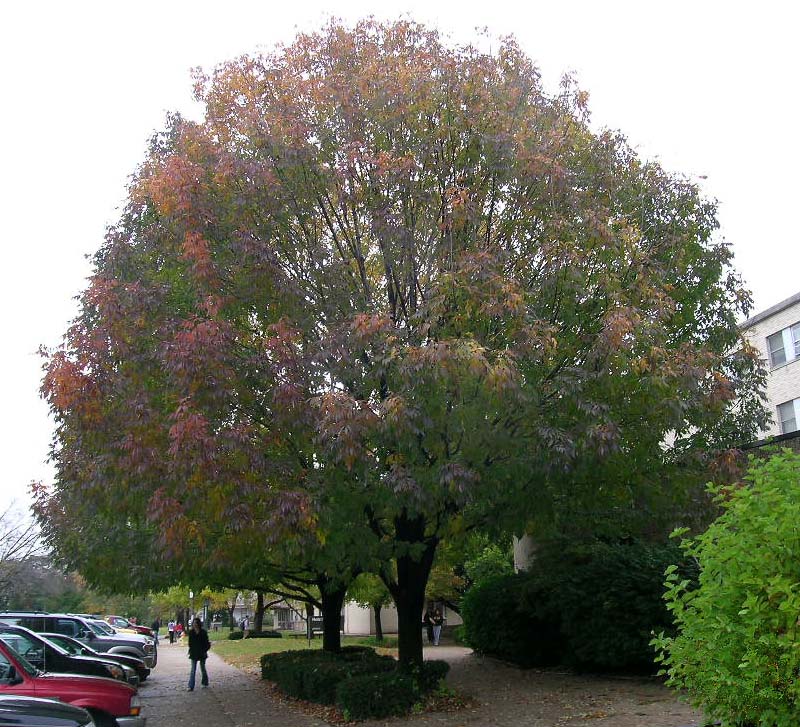 The first time I really noticed Autumn Purple Ash was in the fall in Puyallup, Washington. I rounded a corner and saw what appeared to be large, round, purplish-orange globes on tree trunks. They were spectacular; at least they were that fall. That is one thing I have noticed both in the field, and especially in the nursery. Same trees can turn very different shades of their “described” fall color depending on the moisture and temperature we are having that fall. Whatever the year, though, the Autumn Purple Ash seldom disappoints anyone for fall color.  Of note is the fact that the Autumn Applause Ash has a much darker purple fall color.

The size of these trees can reach approximately 45′ tall and wide, providing a medium size oval form tree. Healthy twigs and buds are large and fat, and the tree has a clean character to it. The opposite pinnately compound leaves emerge a light shiny green, then darken through the year. After their impressive fall color, the leaves drop nearly all at once; perfect for one raking.

The literature lists numerous disease and insect problems for the American Ash varieties, but from my understanding, they are more serious in the East and Midwest. Most frustrating is the occasional “Ash decline”, or dieback, that occurs for no apparent reason. The most vigorous growing trees do not appear to develop as many problems.

When digging these trees in the nursery, the roots appear to be numerous, large, and aggressive. From this, I might assume that root barriers would be recommended when planted in narrow spaces, but I have not seen specific evidence of the need for this. Overall, I have found the Autumn Purple Ash to be an excellent performing medium size shade tree. I suspect its close relatives, the Autumn Applause, Windy City, and others are equally pleasing. As always, send any comments to me on the performance of these trees.