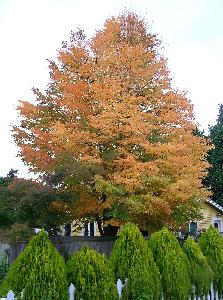 Yellow may not sound spectacular as a fall color until you suddenly come upon a mature Katsura Tree in late autumn.  Its leaves may be best described as clean, bright, yellow, almost florescent, and in some climates or seasons, having a hint of pink or apricot. Late into its incredible fall yellow show, a cinnamon or cotton candy odor is given off as leaves fall.  It definitely is a ‘WOW’ tree at this time of year, but has other great qualities as well.  Into winter, the show does not end.  A variety of trunk and limb forms, its slightly exfoliating medium gray bark, and the potential fluting of the root crown into wide, sometimes shallow, spreading roots makes this a tree of all seasons.

Apparently the scientific name Cercidiphylum comes from its close resemblance to the leaves of the Redbuds, Cercis, but can be readily distinguished from each other since the Redbud leaves are alternate, not opposite.  The Katsura leaves are a bit smaller and slightly heart-shaped, but instead of emerging green, they are a beautiful reddish purple.  Through summer, the leaf color is a dark bluish green unlike any other tree.

The Katsura species in general can have a variety of forms, including single stem to clump, from narrow to rounded, apparently determined by seed source and local site conditions.  There are a few cultivar forms, including weeping and globe, but these I have not yet found more inviting than the species.

Its only small downfall is its sensitivity to drought.  It performs best in deep permanently moist, but draining, soils and needs this to maintain strong healthy leaves into fall.  It is not unusual to see premature leaf drop in late summer or after summer transplant.  Surprisingly, a thorough soaking can bring a new flush of leaves following either of these situations.  It is possible that its mostly fibrous root system lacks the ability to store moisture for long periods.  Fortunately, it does seem to transplant well, especially if provided enough moisture during the first season. I have not seen much evidence of infrastructure damage from this species, which makes sense given the very fibrous root structure. Limbs appear to be somewhat brittle in youth, but toughen up to become stronger and more flexible with age. There are also no serious pest concerns for the Katsura. 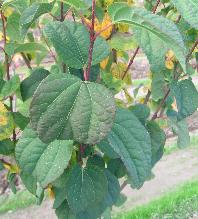 I will admit that I have been reluctant to plant the Katsura much as a street tree because of it sensitivity to poor moisture conditions, until recently.  Just two years ago, our source of grafted liners asked me to look at a Weeping Katsura cultivar he received.  Weeping it was not.  Instead, it had a well developed stout lateral, then ascending limbs almost candelabra-like up its central leader.  Even more impressive was its dark bluish green leathery leaves; vibrant and healthy into fall, while the generic species from our past plantings looked more tattered and spindly.  Ah – the joy of having a nursery!  Those who have visited the nursery recently have been equally impressed.

We will continue our evaluation of this very impressive anomaly and report on it more in the future. Email me your thoughts and your experiences with the Katsura Tree.