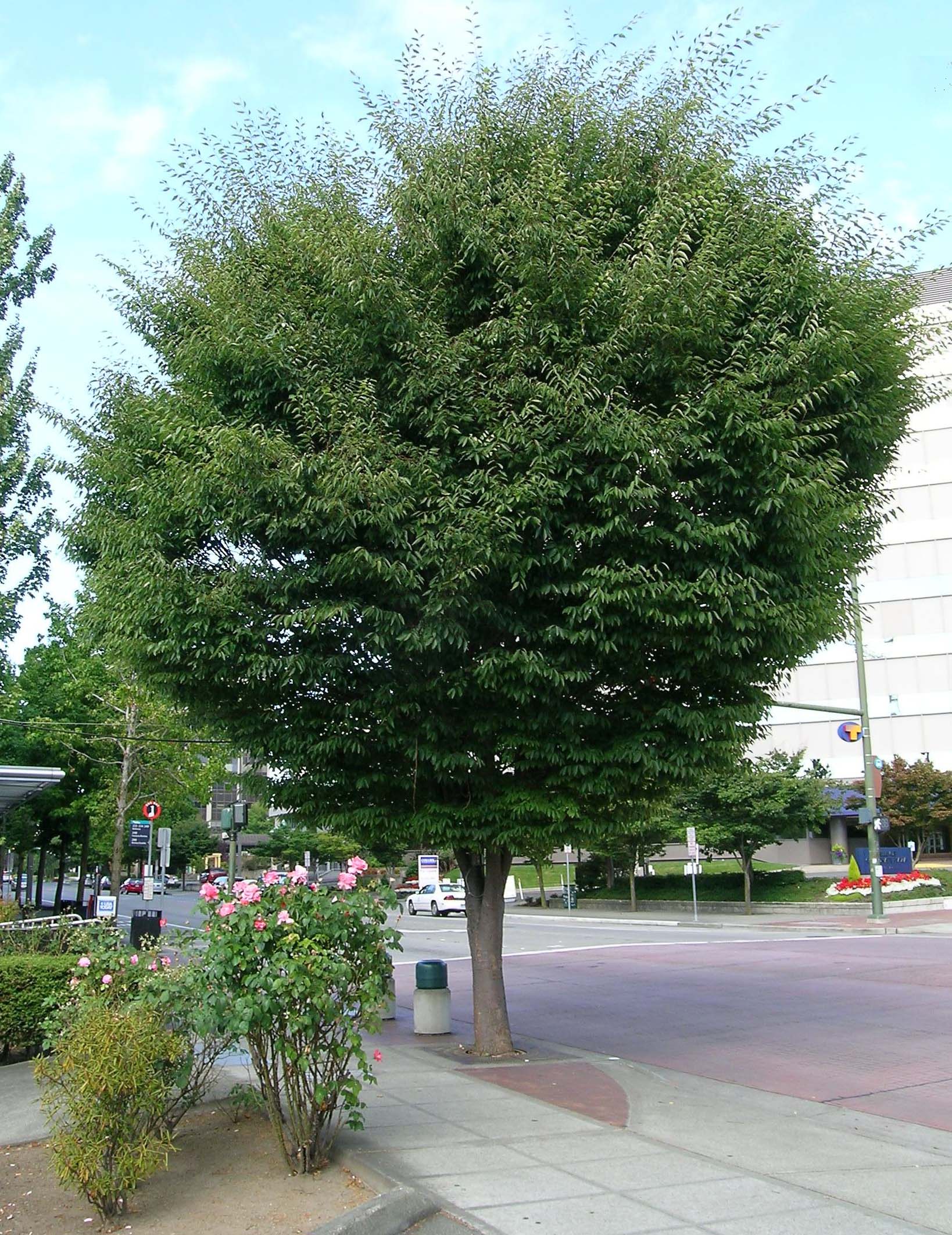 The Japanese Zelkova (Zelkova serrata), and its cultivars, have proven to be a popular and reliable urban tree. Being aware of the differences in the cultivars, and some of the new ones being grown, will help you make the right selection when planting this variety.

The species is fast-growing, somewhat wide-spreading, and vase shaped. The most obvious characteristic of the straight species is the somewhat crooked or curve in some of the limbs compared to most of the other cultivars that have straight limbs. Thought at first to become a replacement for the magnificent elm, the Zelkova will never live up to that due to its ultimate smaller size. The leaf is similar to an elm leaf, but narrower. The fall color is usually yellow, but sometimes bronzy-reddish during dry falls on the west side of the Cascade Mountains, but more typically richer in color on the east side. I have seen some older Zelkovas with included bark, but that may be avoided when selecting in the nursery. Its susceptibility to Dutch Elm Disease has been in question, but most anecdotal evidence suggests there is some resistance. Although I have observed dieback in stressed trees, it appears that once established, it does perform relatively well in the most inhospitable of sidewalk opening locations. See the Zelkovas around Safeco Field in Seattle, Washington or in downtown Bellevue, Washington.

The most popular cultivars I am aware of are the ‘Halka’, ‘Village Green’, ‘Musashino’, ‘Wireless’, and ‘Green Vase’. ‘Halka’ is the fastest and largest growing Zelkova cultivar, making it the closest Zelkova replacement for the elm, but still falling short. ‘Village Green’ has a reliable wide-spreading form, with straight limbs and dense green foliage. You must give this tree crown room to spread. The ‘Green Vase’ Zelkova is a narrower, V-shaped, more upright crown, and an excellent street tree, especially for limited above-ground places with limited width for the crown. The Musashino Zelkova (Zelkova serrata ‘Musashino’) is even narrower than Green Vase, which should become popular. There is also ‘Wireless’TM Zelkova (Zelkova serrata, ‘Schmidtlow’), which is even more broad-spreading than Village Green, making it, as the name implies, appropriate for utility wire locations without growing into the wires.

Given the toughness of this tree and variety of forms available, Zelkovas will continue to play an important role in our street tree arsenal. There should be no excuse for not choosing the right Zelkova for the right place.

As always, I appreciate any comments on experiences you have had on these and other tree varieties.