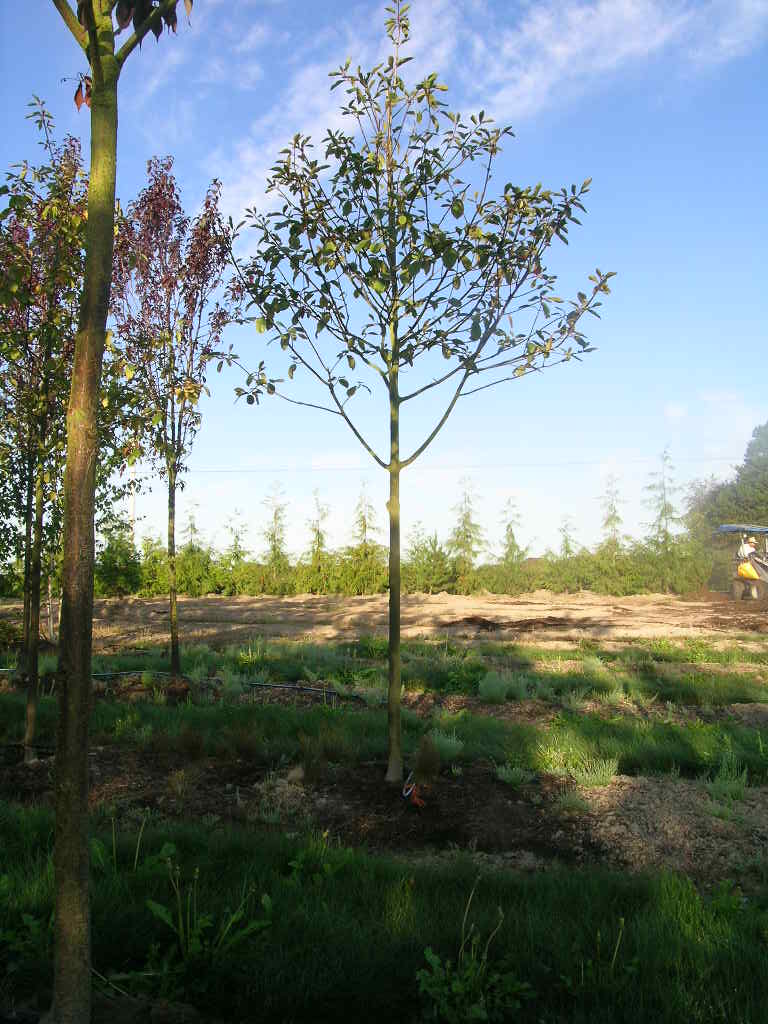 Have you tried the cascara tree, Rhamnus purshiana, and I mean more than for native restoration?  This is one of few native deciduous trees we have in the northwest but for some reason is overlooked as a viable street or landscape tree.  We should reconsider.

In the forest, we are used to seeing cascara reaching out from the edge of a clearing or, brutally unbalanced because of competition.  Some multi-stem cascara might even be mistaken for a large shrub.  Surprisingly, the cascara tree when grown in a nursery setting can have an excellent leader, with good balance and branch structure.  We have grown them off and on for years, but selling most of them for native restoration plantings.

Cascara can flourish in a wide range of soil conditions, from wet to dry, and in sun or shade.  Ultimate size is said to range from 20 to 30 feet tall and about half as wide so this can be an excellent small tree choice.  The leaves are alternate, prominently veined, 5-15 cm (2” to 6”) long, dark green and shiny.  The small greenish flowers in spring are followed by dark colored fruit at least half the size of a marble.  It is excellent wildlife food but not so heavy as to be a nuisance for urban use.  The bark is gray, smooth when young and a bit rougher with age. Branch attachment has a good wide angle and strong from my experience, with hardly ever any inclusions, which indicate weak attachment.  Leaf density is usually not heavy which can be attractive and useful for many locations.  Most striking in my opinion is the potential for outstanding fall color, ranging from yellow, to red and even apricot, which is seldom seen.

The literature notes the possibility of aphids and Phytophthora as concern 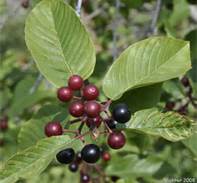 s but apparently this is not significant.  They transplant easily and have a moderate growth rate in native soil.

It would be a mistake not to mention the medicinal interest in the dried, aged bark of R. purshiana which was used first by native Americans in the 1600’s and even more so today as a very effective laxative.  By 1877 the U.S. pharmaceutical company Parke-Davis was producing cascara preparations, and soon afterwards cascara products were being exported overseas to European markets. The explosion of the cascara industry caused great damage to native cascara populations during the 1900s, as a result of overharvesting.    In 1999, cascara made up more than 20% of the national laxative market in the U.S., with an estimated value of $400 million. The bark itself was worth approximately $100 million. Cascara was found in more drug preparations than any other natural product in North America, and is believed to be the most widely used cathartic in the world.

So, what’s not to like about the cascara tree, unless you accidentally eat the bark.  I know that a few have been planted around Seattle but probably in other urban locations as well.  Let me know how they are doing or better yet, send a photo. As always, let me know your experience with this tree.