Hey, what about evergreens in the city?   OK, we don’t see them much as street trees but they are planted throughout town in parks, buffers, and open spaces.  Consider one of my favorites, the Blue Giant Sequoia, Sequoia giganteum ‘Glaucum’.  Yes, most of us love the straight Giant sequoia species but you have to give it significant space to grow, or should I say, a huge space to grow.  That is why you should consider the ‘Glaucum’ cultivar.  It is more usable in town because it tends to be a narrower and slower growing tree than the species.  I have seen a few at major intersections in the city of Bellevue.  I imagine it will reach significant size eventually, but not nearly as fast, or as tall or wide.  A.L. Jacobson notes the local record holder as almost 120’ tall in his 1996 printing of the ‘North American Landscape Trees’.  They are native to the high elevation western slopes of the Sierra Nevada range in California but they seem to absolutely love our climate in the Pacific Northwest.

The foliage is bluish-green, seemingly bluer with establishment, sharply scaly and cord-like, and well, somewhat difficult to describe.    It is best to check out the photos and confirm the species in person.  Once you have seen the whole tree, you probably won’t forget it.  The trunk is also huge nearest the base but still less than the species.   A well balanced arrangement of limbs surrounds the tree all the way to the top, and sharply ascend upward, more-so near the tips.   The form is a tall narrow pyramid, sharp and pointed at the top. 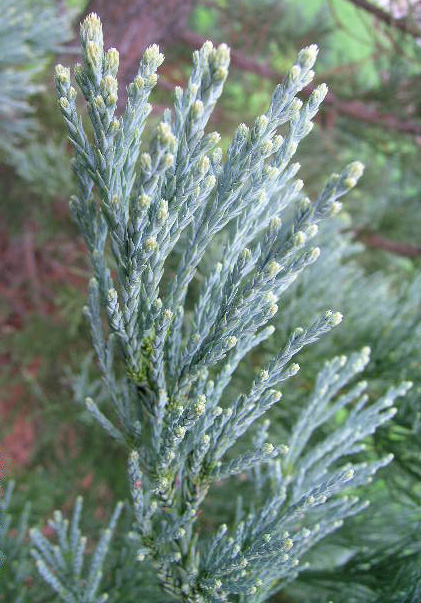 This tree appears to transplant easily and grow at a moderate rate once established. It does not sucker like the Redwood, Sequoia sempervirens.   It is nearly disease and insect free, except for the Honey Fungus, according to Jacobson.  Giant Sequoia ‘Glaucum’ could easily live for hundreds of years and still grow relatively large, so plan well.  They are excellent as single specimens, odd numbered groups, or matching sentinels delineating property lines or outdoor spaces.

Let me know if you have any comments on this or other trees in the field.