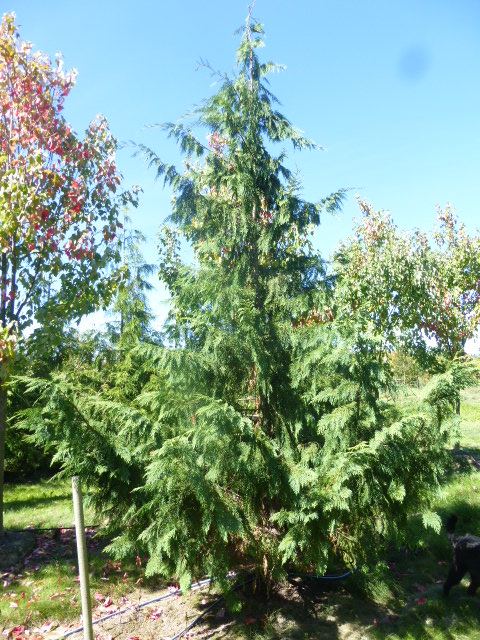 Alaska-cedar is also commonly called Alaska yellow-cedar, yellow-cedar, Alaska cypress, and Nootka cypress. An important timber species,  it is one of the slowest-growing conifers. Of landscape significance is the fact that it stays green through the winter months when the native red cedar turns a golden reddish brown, enough to make people think they have died.  They are also much more fragrant than the red cedar.

Alaska-cedar grows from northern California to Prince William Sound, AK Except for a few isolated stands, it is found within 160 km (100 miles) of the Pacific coast. Isolated stands in the Siskiyou Mountains, CA, near the Oregon border mark its southern limit. In Oregon and Washington, Alaska-cedar grows in the Cascade Range and Olympic Mountains; scattered populations are found in the Coast Ranges and in the Aldrich Mountains of central Oregon. In British Columbia and north to Wells Bay in Prince William Sound, AK, it grows in a narrow strip on the islands and coastal mainland.

Alaska-cedar is notable within the cypress family for its tolerance of cool and wet conditions. The climate of its natural range is cool and humid. Climatic conditions at elevations where Alaska-cedar grows in the Cascade Range of Washington are somewhat comparable to those at sea level in coastal Alaska.

Let me know if you have any experience with the Alaska Cedar.